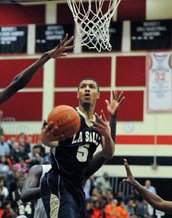 It was early on, after a turnover and missed rebound, that Dave Krmpotich was taken out of the game by La Salle coach Joe Dempsey.

“We went over a couple of things,” Dempsey said of Krmpotich’s brief stay on the bench in Tuesday night’s PIAA Class AAAA boys’ basketball semifinal against Chester. “I just wanted to calm him down, get a message across.”

Apparently, it worked. With the 6-foot-7 junior netting 19 points, the Explorers surprised the vaunted Clippers, 61-55, at Coatesville to secure their first berth in the state final.

“It’s beyond my wildest dreams,” Krmpotich said of helping La Salle, District 12’s third-place finisher, advance to Hershey. “I don’t know how many people believed we could get here, but we had confidence in ourselves.”