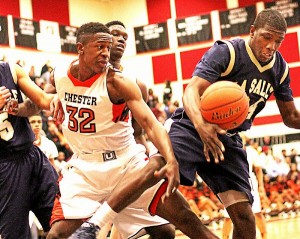 What happened to Chester Tuesday night at Coatesville Area High School could be construed as a blatant miscarriage of justice perpetrated by the men wearing black-striped shirts.

Whether the Clippers were cheated out of a fourth straight trip to the PIAA Class AAAA championship game is open for interpretation. Boasting such claims would discredit La Salle College High School, a team that was on the brink of elimination rounds ago, and narrowly defeated Central Philadelphia High just to get into the tournament as District 12’s third-place team.

Chester is supposed to be at this point every year, appearing in what was its 28th state semifinal. PIAA title or bust, the Clippers remain the measuring stick for all boys basketball teams in Pennsylvania. Even with the underdog tag, the Explorers showed they deserve to be there, too. The Explorers assuaged worries they couldn’t match up with Chester’s caliber of athletes, and beat the Clippers at their own game.