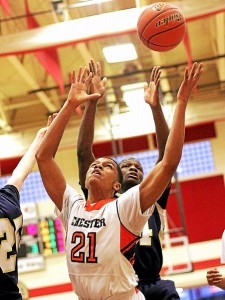 Larry Yarbray’s final appraisal of his Chester team’s PIAA semifinal ouster didn’t concern the refs. It didn’t involve bad calls, complaining or games of “what if.”

Instead, Yarbray’s explanation for his team’s 61-55 loss to La Salle in the PIAA Class AAAA semis Tuesday night at Coatesville High School was much simpler.

“We didn’t have maximum effort early on,” the Chester coach said. “We didn’t fight all the way through. A couple of breaks we didn’t get today. We missed shots we normally make, a lot of layups, stuff like that.”

Chester’s Tyrell Sturdivant takes one to the basket against La Salle Tuesday. The Clippers shot 16-for-45 from the field in the game. (Robert J Gurecki)

The word “execute’ has grown hollow with repetition on the hardwood, but it rang true Tuesday night. Chester missed far too many shots, going 16-for-45 from the field. La Salle, meanwhile, shot over 50 percent from the floor (18-for-33) and hit its free throws at crunch time to book a place in the state final. Ultimately that complex concept of execution spelled the difference between the teams, helping La Salle accumulate a double-digit lead in the fourth quarter that it was able to hang onto.