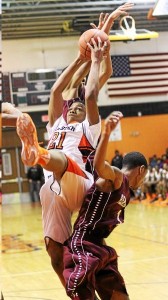 Through the first two thirds of the season, striking a balance in the Chester backcourt has been a work in progress.

There’s little doubting the talent that Mahir Johnson and Conrad Chambers bring to the court. Tuesday night, they showed their ability to complement each other and take over a game.

Johnson led all scorers with 19 points, and Chambers chipped in 11 timely points, nine in the second half, as the Clippers avenged a loss to Penn Wood with a 59-54 Del Val League win.

The fact that Johnson, who entered averaging 19.5 points, lit up the scoreboard isn’t news. What was most important was when he chose to step up, shaking off some so-so shooting to score nine fourth-quarter points, including Chester’s first seven of the frame to open up a cushion in a two-point game after three quarters.