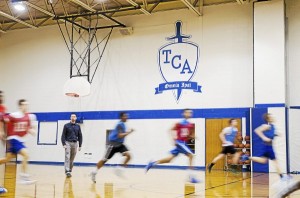 As a parent and an administrator, Kevin Skaer appreciated both sides of the coin.

On the one hand, the principal of The Christian Academy understood the athletic relationship that his school had forged with the Tri-State Christian Conference, a collection of schools of similar sizes and religious affiliations. But as a parent of varsity athletes at the school, Skaer also appreciated what was lacking.

“Even though they’re great, people do ask, ‘ who are you playing again? Oh, Atlantic Christian. Where’s that?,” Skaer said recently.

That reasoning and a desire to return to their local roots is why TCA is readying itself to transition to the Pennsylvania Interscholastic Athletic Association next school year. The club has prepared its application, per the PIAA’s specifications, for the District One committee. Membership in the PIAA is voluntary, and ratification by the district committee — and then the state — by the end of May would admit TCA effective July 1, 2015.