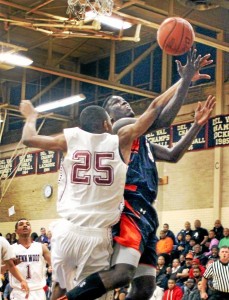 It usually doesn’t take long for Malik Jackson to figure out if it’s going to be a good night for him and his Penn Wood team.

Thursday night against Chester? Yeah, Jackson said afterward with a wry smile, he knew pretty quickly what kind of night it would be.

The Penn Wood guard scored a game-high 25 points, including draining six 3-pointers, in leading his Patriots over Chester, 65-56, in a marquee Del Val League matchup.

The loss is the first for Chester in Del Val play since Feb. 4, 2010 when it fell to the Patriots, a team that went on to be a PIAA Class AAAA runnerup.

Much of the reason for the end of that auspicious streak was the hot shooting of Jackson, who entered as Delaware County’s leading scorer. He had 14 points at halftime Thursday night, and the only thing separating him from his fourth 30-point game of the season was an uncharacteristic 3-for-8 night from the free throw line.