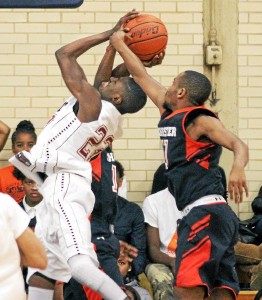 They squeezed into Penn Wood High gymnasium Thursday night, turning away fans as they always seem to need to do when Chester comes for a visit.

Since 2006, Delaware County’s premier basketball rivalry has been more than a best-of-two, -three, even -four meetings. It has been the competition to see who will serve as half of the representation in the PIAA Class AAAA championship — five of them Chester’s, the other two Penn Wood’s.

If there is a year where that string is at risk, this allegedly is the year. The Clippers were dealing with the loss of Rondae Jefferson, one of the country’s top recruits a year ago, not to mention four other key players. And the Patriots were far enough away from state final quality last season that coach Clyde Jones and his players had some proving to do.

Consider Penn Wood-Chester I a successful venture to the proving grounds for Jones and his team.