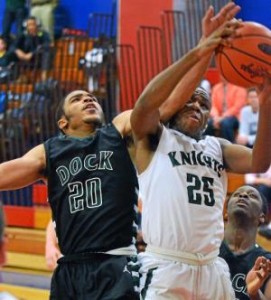 Delco Christian’s Jordan Parks, right, grabs a rebound away from Christopher Dock’s Sean Hinson in the second half of Delco Christian’s 52-50, double-overtime win in the District One Class A semifinals Wednesday night. (Mark C Psoras)

The leads flipped as easily as the chants from both teams in the District One Class A semifinal Wednesday night.

It took two overtimes to decide whom would come back Saturday afternoon to play for a district title and extend its season into the state tournament. With one second remaining, an inbounds pass under the basket to Delco Christian’s Devin Hill halted Christopher Dock’s season with a 52-50 loss.

“It’s easy to come up with a play when you have great players,’ Knights coach Don Davis said. “When you have a player like Devin, you just give him space. It’s the players, not the coaches, that make that play.’

“There is a laundry list of things, and the game had so many swing points,’ Pioneers coach Mike Fergus said. “You can come up with 30 different moments that could have helped the game go the other way.’

The win pushed the Knights record to an even 12-12 after starting 2-10. The group kept their heads up through tough times and it has propelled them to a state berth and one win away from a district championship. When the Pioneers (9-15) pulled out to a six-point lead at halftime, the Knights kept their heads up.