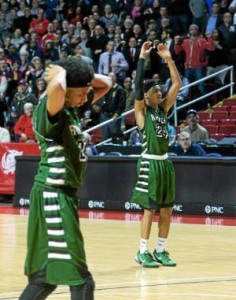 Ridley’s Julian Wing, right, and Justin Dawson can’t hide their disappointment after Wing’s attempt at a tying 3-pointer at the buzzer was off the mark as the Green Raiders fell to Plymouth-Whitemarsh, 44-41, in a District One Class AAAA semifinal Wednesday night. (Tom Kelly IV)

Even Plymouth-Whitemarsh’s high-scoring senior guard hadn’t heard of Ridley before his team was set to face the Green Raiders in a District One Class AAAA semifinal Wednesday night.

When the Green Raiders awaited tipoff against Xzavier Malone and the rest of his Colonial teammates, Ridley had already knocked off the likes of Lower Merion in a Central League semifinal, and defeated league foe and the district’s No. 1 seed, Conestoga, twice in the postseason en route to Wednesday night’s contest at Temple’s Liacouras Center, an arena that features a seating capacity of more than 10,000.

Though ninth-seeded Ridley couldn’t complete an upset of the Colonials in a 44-41 defeat, it took the tournament’s fourth seed to the wire on an unfamiliar stage.

“I don’t think we were nervous or anything like that,’ Ridley coach Mike Snyder said. “The kids just came out to play.

“Overall, it was a great effort by our kids and we just came up a little short.’

The Green Raiders hung tight with the Colonials for much of the contest. They never trailed by more than three at the end of each of the first three quarters, and responded when its opponents put up a run.

Plymouth-Whitemarsh held a seven-point advantage midway through the second quarter, Ridley went on a 10-3 run to cap off the half, including a 3-pointer from junior Julian Wing at the buzzer that would knot the score at 20 apiece heading into the break.