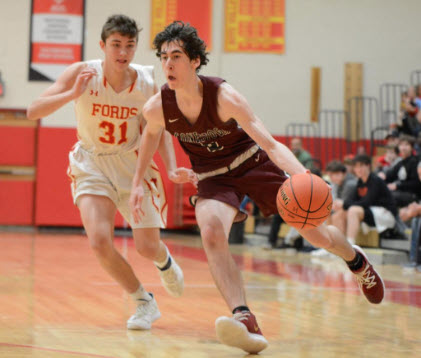 Tonight’s destination was the Haverford High School gymnasium, as the Fords hosted Conestoga in a Central League matchup. A slow offensive start had Haverford down four at the break, but a stout second-half defensive effort paved the way for the home squad to stay unbeaten earlier in the year thanks to a 41-31 victory.

I’ll have a story on the Fords’ hot start up in the next few days, but below is a quick report featuring some notes and stats on the game, as well as a photo gallery at the end.

There’s no doubt who was the best player on the floor. When junior wing guard John Seidman was out for most of the second quarter after picking up two first-half offensive fouls, the Fords’ offense struggled to get much going, failing to score a point in the final four-plus minutes of the half. But Seidman was out there the whole second half, and he made all the difference. The 6-2 guard isn’t real bouncy or flashy, but he’s productive, and there was a reason Conestoga double-teamed him whenever he had the ball. Seidman finished with 13 of his 15 points in the second half, grabbing 11 rebounds (two offensive) along with four assists, two blocks, and a steal. Seidman’s a true plugger, getting a few buckets off his own misses and taking advantage of driving lanes to get to the hoop, where he’s an adept finisher with both hands.