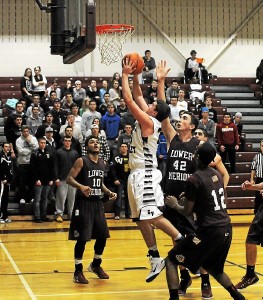 Garnet Valley’s Austin Klenotiz looks for two of his game-high 22 points against Lower Merion Dec. 16. After a slow start to the season, the senior forward has turned up the scoring of late. (Rob Dudley)

But in both situations, Pagan has found solace, one 3-point basket at a time.

The 91-74 loss to Garnet Valley was notable, not just for a score that most college teams would envy, but for the fact that Pagan drained 10 3-pointers as part of a 36-point outburst, the highest single-game total in Delaware County this season.

The hope for Pagan and Interboro coach Jeff Webb is that the guard’s offensive coming-out party is a definitive turning point, leaving behind a tough start.

“We’ve been begging him to shoot,’ Webb said. “We told him he’s by far the best shooter we’ve had, and I’ve been here 12 years. He’s had the green light.’