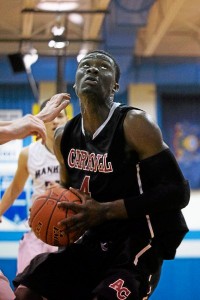 Just 14 minutes, 35 seconds into their quest for a state title, it all could’ve gone up in smoke for Archbishop Carroll, in one Derrick Jones-shaped heap on the court.

But while Jones recovered briefly on the sidelines, his supporting cast made sure the Patriots would be on the right side of the ledger, both when he returned and at the end of their opening-round PIAA Class AAA game.

The Patriots got contributions up and down their nine-man rotation, weathering some time on the sidelines for their star forward as Carroll earned a 57-35 win over Manheim Central at Garden Spot High School Friday night.

With 1:25 left in the second quarter, Jones landed awkwardly, his left leg caught under his body as he went to the basket and was fouled by the Barons’ Tony Staffieri. After writhing in pain briefly on the deck, Jones walked gingerly to the locker room, clutching his left hip and inducing a brief wave of panic in coach Paul Romanczuk.