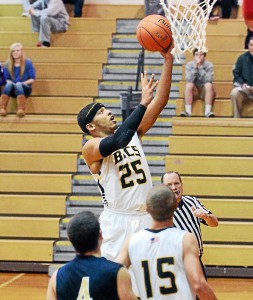 Interboro’s Christian Irons lays the ball in against Sun Valley in the fourth quarter of their game during the Play 4 Gray Day at Haverford High School Monday. Irons had 22 points to lead the Bucs to a win. (Julia Wilkinson)

Five guys wearing his colors headed to the scorer’s table and, when Christian Irons caught notice, he began staring at the rafters in disbelief.

Not even four minutes into Monday’s game, Irons and the rest of Interboro’s starters were being lifted in favor of Jeff Webb’s second unit. Irons sat the bench for the rest of the first quarter, save the final five seconds.

Irons blamed it on a lack of effort. He made up for it later.

The Interboro senior scored 15 of his game-best 22 points in the third quarter, when the Bucs took control and sent Sun Valley to a 57-47 nonleague loss. The Bucs erased a 15-point deficit with a stellar third quarter, in which they outscored Sun Valley, 22-10, by shooting 10-for-12 from the floor.