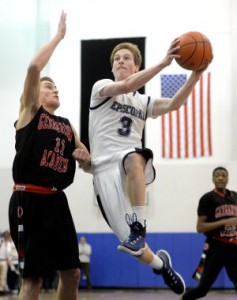 All season, Tim Guers and Germantown Academy assistant coach Jonathan Haynes have had a running conversation on the meaning of senior leadership.

Friday night, against Episcopal Academy with the Inter-Ac League title on the line, Haynes and Guers ascertained that it was time to put those lessons into action.

“He told me it’s one thing to try to shut down (EA’s Matt) Woods; it’s another to try to take the game over,’ Guers recounted. “We’re up four, take the game into your hands. And that’s what I tried to do.’

In a tightly-balanced game begging for someone to take over, Guers obliged, draining 33 points and leading GA to a 74-50 win, clinching the Patriots’ third straight Inter-Ac title.

After the teams were separated by just four points at halftime, the reigning (and likely repeat) Inter-Ac player of the year grabbed the game by the scruff of the neck, scoring 27 points after the break; EA had just 29.

Guers had 16 in the third quarter alone, outscoring EA by three. He went through a stretch of hitting nine of 10 looks from the field, including three of four efforts from behind the arc. He was also a perfect 8-for-8 from the free throw line and found time for seven rebounds and four assists.