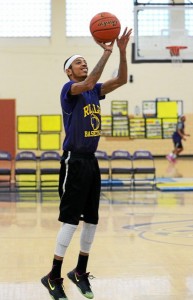 Upper Darby’s Torey Green, returning to the Royals for his senior year, has helped the team storm out to an impressive start this season. (Julia Wilkinson)

Torey Green knew where he wanted to be last year.

As the Upper Darby boys basketball team made a run to the PIAA Tournament, Green was there every step of the way.

He wasn’t on the court or on the bench, like he had been as a freshman and sophomore. Instead, the West Catholic junior was a few rows back, taking in the games as a fan, wondering what could’ve been.

This season, Green is back at Upper Darby, and he’s turning the speculation into action.

“I kind of missed being with the same guys I was with all my life,’ Green said. “I was here at all the playoff games cheering them on. I was right behind them all the way. I was hoping that they went farther, all the way to the state title.

“But now that I’m back, that’s what we’re trying to do this year.’

(click on this link for the rest of the article)