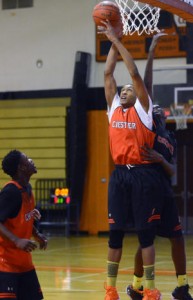 Somehow when Larry Yarbray says it, the cliché doesn’t sound quite so tired.

For Yarbray, the edict that “defense wins championships” is a central facet to the ethos of Chester basketball. Not surprisingly, it’s been at the heart of what has led the Clippers into Tuesday’s PIAA Class AAAA semifinal against La Salle. Tipoff is at 7:30 p.m. at Coatesville High School.

As goes the refrain, this year’s Chester team took time to meld, with young players tasked with contributing beyond their years and veteran transfers brought into the fold. The lag in cohesion was most prevalent on the defensive side, where it took time for Yarbray to instill his principles of team defense.

A more important turning point, though, came when Yarbray convinced his players, from one to 15 on the roster, to commit to wanting to be the kind of aggressive, dogged defenders that has characterized some of Chester’s best squads of the past.