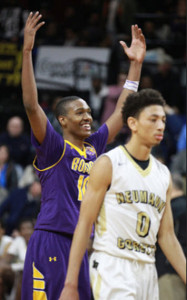 Roman Catholic’s Tony Carr raises his arms as the outcome of the game becomes apparent in the closing seconds. (Charles Fox/Staff Photographer)

This time, it was Roman Catholic, which had waited eight years for a return to glory, that refused to be denied.

Against Neumann-Goretti, which was seeking a record seventh straight Catholic League title, the highly motivated Cahillites snapped the streak with a thrilling 64-59 triumph Monday night before an energized and packed crowd at the Palestra.

“It’s kind of surreal,” Roman coach Chris McNesby of the program’s first crown since 2007 and 29th overall. “I have so much respect for [Saints coach] Carl Arrigale and the way he runs his program. There’s a rivalry there, but there’s also mutual respect.”

Nazeer Bostick was the catalyst for the Cahillites, who claimed their first crown since 2007. The 6-foot-3 junior forward totaled 23 points and was a terror on the glass.