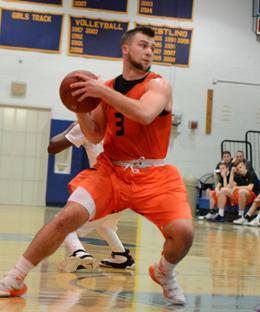 Anthony Paoletti (above) came up with a big-time hustle play to help Marple Newtown past Springfield (Delco.) on Tuesday night. (Photo: Josh Verlin/CoBL)

That was made clear by the fourth quarter of a game at Springfield (Delco.) on Tuesday night, by which point the Marple Newtown senior had already taken a third-quarter pop to the head that required him to go see the trainer to stem some bleeding. He quickly came back out to finish the game, despite needing to go to the hospital afterwards to get some stitches.

But it was confirmed when Paoletti saw a loose ball bouncing around the court with a minute to play in the fourth quarter, he didn’t hesitate. With his Tigers clinging to a quickly-dwindling lead and desperate for something good to happen, Paoletti threw himself on the floor, securing further possession for his team.