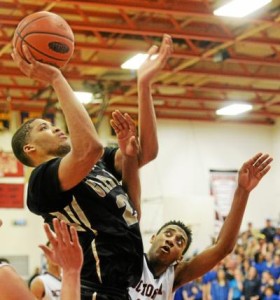 Glen Mills’ Anthony Johnson, left, goes up for a layup over Octorara’s Levi Worthington during the District One Class AAA championship game Saturday. Worthington and the Braves claimed the district title with an 80-54 victory. (Tom Kelly IV)

Octorara’s Levi Worthington didn’t seem to want to give up the District One trophy Saturday evening, cradling it through interviews even as his teammates begged to pose for pictures with it.

His desire to keep a hold of the trophy mirrored the tenacity with which he helped his Braves attain it.

The power forward scored a game-high 24 points, including 11 in a 27-point first quarter from which Glen Mills couldn’t recover in an 80-54 setback in the Class AAA championship game before a sweltering capacity crowd at Colonial Elementary School.

Worthington and the top-seeded Braces (25-2) simply blitzed Glen Mills from the tip. They led 27-10 after one frame thanks largely to Worthington’s early offense and a swarming pressure defense that caused eight Glen Mills turnovers, a relatively moderate total considering that the Battlin’ Bulls coughed up the ball on each of their first five possessions.

So often, adages about preparation and coming ready to play sound trite. Saturday, the difference was clear.

“We realized this is the championship,’ said Worthington, who added eight rebounds despite foul trouble limiting him in the third quarter. “You don’t get that many chances. Not a lot of people get a chance to say they’re in a district championship. So we understood, yeah, we’ve got to go out there like it’s our last, and that’s what we did.’