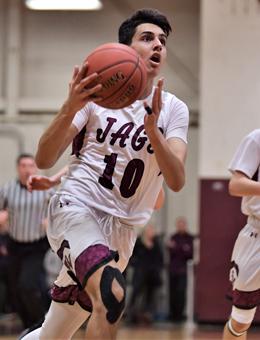 Garnet Valley had gone more than three years without a win against Lower Merion. Six games, six losses, including a 13-point defeat on the Aces’ home floor more than a month ago.

But with a Central League regular-season title for the taking, the Jaguars put that streak to bed and did so with a performance that will undoubtedly grab the attention of everyone in District 1.

Garnet Valley smashed Lower Merion 77-32 Thursday at home, starting out the night on fire and never cooling off in winnings its first-ever Central League regular-season crown. The Jags led by 16 at the end of the first quarter and extended their lead to 51-10 by halftime, knocking down nine of their 17 3-point attempts before intermission.

Four different Garnet Valley players put up double-figure points, led by senior Chris Coyne’s game-high 18, and although the Jaguars knew the crown was theirs almost from the get-go, there was still plenty to celebrate afterward.