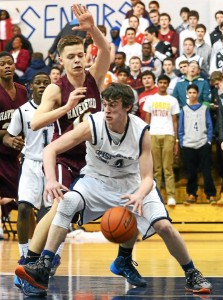 There was no offense taken, no disagreement even, among the Episcopal Academy basketball team Friday night.

To a man, they were fine with admitting one point: If you were playing a game of pick-up, choosing from the rosters of Haverford School and EA, your first three or four choices might all be wearing Haverford School colors.

That fact mattered little by the time Friday night was over.

“We just work really hard,’ said senior Chris McNeal, standing under a scoreboard that read 70-64 in favor of his Churchmen. “We pride ourselves in working hardest in the league. We’re a really close team, and that’s the difference today.’

For all the names and Division I talents on the Fords, Episcopal managed to produce an effort Friday that far exceeded the sum of its parts — one gutsy defensive stand, one hustle play at a time.