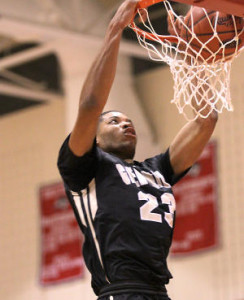 When pressed for the number of 3-pointers he’d made this season before Wednesday night, Glen Mills center Anthony Johnson quickly declared, “two.’

So when he peeled off to the corner of Harriton’s court on a sideline inbounds play with 6.4 seconds left in a tie game, he knew a reputation as a sharpshooter wouldn’t follow. But he also knew something else.

“My confidence in myself is up,’ Johnson said, “but my coaches, they don’t really want me to shoot that shot. I do everything I can not to shoot it. In that type of situation, I’ve got to catch and shoot, so my confidence is up.’

That situation produced a buzzer-beating 3-pointer from Johnson, earning his Battlin’ Bulls a 55-52 win over No. 2 seed Lower Moreland in the District One Class AAA semifinals and a berth in the PIAA Tournament.

The No. 3 Bulls (18-6) advance to Saturday’s title game against top-seeded Octorara, a 68-65 winner over Pottsgrove in the second semi. Tipoff is at 4 at Plymouth-Whitemarsh.

Glen Mills will head to its first PIAA Tournament since 2009 thanks to the heroics of Johnson, who was saddled with foul trouble for three quarters but scored 11 of his 13 points in the fourth.

The final contribution came in about as unorthodox a manner as possible. With the game tied at 52 thanks to Danny Duffy’s latest daring drive to the hoop, Glen Mills nearly threw the ball away before coach Tony Bacon called timeout with 6.4 ticks left.