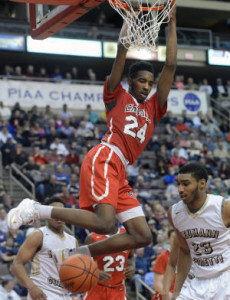 Archbishop Carroll’s Derrick Jones throws down two of his game-high 30 points Friday night, but it’s not enough in a 69-67 win by Neumann-Goretti in the PIAA Class AAA Championships Game at Hershey’s Giant Center. (Tom Kelly IV)

In some respects, Neumann-Goretti was perfectly content with Archbishop Carroll’s Derrick Jones playing the way he did Friday night in the PIAA Class AAA championship game.

The UNLV-bound forward put the finishing touches on his scholastic career with a monster performance. He had 30 points, 18 rebounds and five blocked shots.

To Jones, none of it mattered because his team lost.

In a Philadelphia Catholic League/District 12 battle for state supremacy, the Patriots dropped a 69-67 decision to the Saints, who earned their fifth trophy in six years. The defeat marks the second time in Jones’ sterling career that he’s lost at Hershey’s Giant Center on the final day of the season.

After it was over, Jones summarized his efforts.

“I think I gave it my all,” Jones said, “but sometimes your all isn’t enough.”