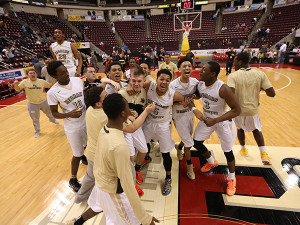 The Neumann-Goretti boys’ basketball team can attribute part of its most recent PIAA Class AAA state championship to the free-throw shooting work it put in at 10th and Moore.

In the final Friday night at the Giant Center, the Saints went a respectable 21 for 29 from the stripe compared with Catholic League rival Archbishop Carroll’s ghastly 10 for 25 showing.

The result was a 69-67 triumph for the Saints, marking the program’s fifth state crown in six seasons and its 13th consecutive victory over the Patriots.

“This is the best free-throw- shooting team I’ve ever had,” N-G coach Carl Arrigale said. “We’ve made them all year. We have three guys who shoot 80 percent or better.”

After losing four-year star Ja’Quan Newton (now at Miami) to graduation, many wondered if Arrigale’s squad would have enough left in the cupboard to again make major noise. The Saints missed out on their seventh straight Catholic League title, but defended their state crown.

“The mind-set all year was to keep the dynasty going,” said junior wing guard Zane Martin, who led the way against Carroll with 26 points and six boards.