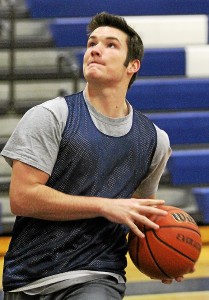 Sun Vally junior Ryan Hall is excited about the future of the Vanguards program despite their struggles this season in coach Steve Maloney’s first on the bench. (Robert J Gurecki)

But the 3-14 record hanging next to the Vanguards name doesn’t quite capture the progress Maloney and his young team have made.

Sun Valley has trotted out 17 players this season, one of the higher totals in the county. Only three players have appeared in all 17 games. Injuries and off-court issues have prevented several players that Maloney anticipated would be major contributors from having much of an impact.

The response from Maloney has been simple: If the Vanguards are going to take their lumps, the coach is at least going to let the younger players on his roster gain valuable experience, hopefully getting some of their growing pains out of the way with an eye toward a brighter future.

The youth-first tactic has its drawbacks. For one, Maloney only took the job in July, meaning he had precious little time to prod his players to develop chemistry and gain experience via summer leagues and open-gym sessions, a problem exacerbated by many of Maloney’s players spending the fall on the football field.