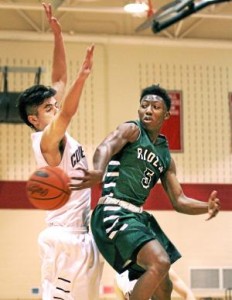 Guard Brett Foster, right, was the driving force for a Ridley team that won its first Central League title since 2008 and earned a berth in the PIAA Class AAAA playtoffs. Foster was voted the Central League s MVP. (Robert J. Gurecki)

In addition to Daily Times Player of the Year Derrick Jones, the rest of the All-Delco team includes:

Shawn Alston, Haverford School: The senior guard and two-time selection averaged 19.4 points per game for the Fords, who finished third in the Inter-Ac and advanced to the semifinals of the Pennsylvania Independent Schools Athletic Association tournament. Alston also averaged 5.1 rebounds, 3.2 assists and 2.2 steals per game. He scored a season-high 30 points in a Dec. 5 win over Imhotep Charter and notched 15 or more points in nine of the Fords’ 10 Inter-Ac games. The All-Inter-Ac selection scored 24 points against Germantown Academy and 25 against Malvern Prep in his final two league games. Alston finishes his high school career with 1,461 points, second in program history. The Temple signee was voted the USA Today high school Player of the Year in Pennsylvania and to the Pennsylvania Sportswriters first team All-State.