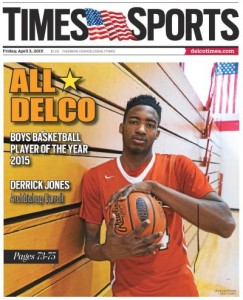 Derrick Jones didn’t grow up watching the NBA. He wasn’t caught up in the whirlwind of March Madness.

What Jones knew about the game of basketball was what he saw on the courts of Chester, from the group of acquaintances he kept on the blacktop. From that group, his early role model was profound.

“My brother was the best player to me,’ Jones said last week. “When I started playing, I always had that mindset that I always had to be better than what he was. I wanted to be the best.’

Jones is five years younger than his brother, Lakeem Johnson, a 2010 Chichester grad who played varsity for the Eagles. From the time Jones was a star in the 7/8-year-old Chester Biddy League, Johnson was responsible for furnishing daily challenges away from the realm of organized games. While Jones’ stock shot up on the AAU circuit, the work put in away from the scouts, spectators and sponsors is what truly drove his rise.

“It was kind of blood, sweat and tears, because we had a basketball court out back, I always challenged him to make him better,’ Johnson said. “As he got older, he got better than I am, and I respect that. I always pushed him to the limit to make him better.’