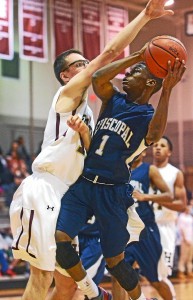 Lukas Rosenbohm’s first season at The Haverford School hasn’t come without the need to make some major adjustments.

That means off the court, too. When you’re a trip across the Atlantic Ocean and 4,000 miles away from your home and family, you tend to have some acclimating to do. But since he first started playing basketball, Rosenbohm always wanted something like this.

Rosenbohm always envisioned himself making the trek from his hometown of Ulm, Germany (most famous citizen — Albert Einstein) to the United States as an exchange student. That dream came to fruition this year when he made the decision to study on Lancaster Avenue. Saturday, he got his introduction to the famed rivalry with Episcopal Academy and more than held his own, netting eight points on 4-for-5 shooting and snaring six rebounds as the Fords downed the Churchmen, 61-48, in the Inter-Ac League opener at Philadelphia University.