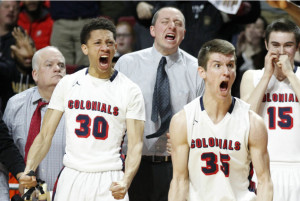 Davon Burrell, 2nd from left, and Mike Lotito #35, of Plymouth Whitemarsh celebrate after a made basket in the 4th quarter of their 68-57 vistory over Chester in the 1st half of a District 1 AAAA Final on Feb. 26, 2016, at Temple University’s Liacouras Center. CHARLES FOX/Staff

Solid perimeter defense, key bench contributions, and an impressive showing on the offensive glass paved the way for Plymouth Whitemarsh’s first district crown since 1998.
Also sparked by Xzavier Malone’s 18 second-half points, the Colonials downed turnover-plagued Chester, 68-57, to earn top PIAA District 1 Class 4A honors Friday night at Temple’s Liacouras Center.
Malone, a 6-foot-3 senior wing and Rider recruit, netted a game-high 29 points and six boards as second-seeded PW (25-2) captured its sixth overall district championship and first under 18-year boss Jim Donofrio.
“This feeling is unreal, beating Chester in this arena and in this type of atmosphere,” Malone said. “It’s something I’ll never forget.”
Webmaster’s note:  You can listen to this entire game by going to our Game Archives.  Just click on the logo on the left side of this page and listen to the entire game 24/7.  Our sponsors (listed on the right side of this page) pay for all broadcasting and archive costs!
(click on this link for the full article)