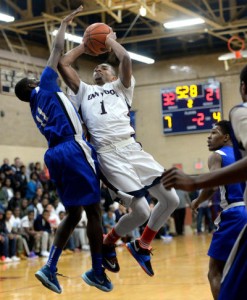 Penn Wood’s Malik Jackson goes up for a layup and is fouled by Academy Park’s Travis Smith Thursday night. Jackson scored a game-high 33 points as Penn Wood clinched a share of the Del Val title with a 72-53 win. (Tom Kelly IV)

From the chatter on Twitter, Malik Jackson knew Thursday’s meeting with Academy Park would be decided in large part by the mano-a-mano battle between he and Jawan Collins.

But the fact that Jackson’s Penn Wood teammates didn’t leave the burden solely on the senior’s shoulders went a long way in providing an easy evening for the Patriots.

Jackson did the heavy lifting with a stellar night of 33 points and 12 rebounds, but a commitment to team defense stifled the Knights early and often, allowing Penn Wood to run out to a 72-53 win and guarantee at least a share of the Del Val title.

Either way, the Patriots (17-5, 8-2) will hang a second straight banner in their gym, one sealed with emphasis thanks to Jackson.

His production was constant, scoring at least seven points in each quarter. Every time Academy Park appeared poised to make a game of it, Jackson was invariably there with an in-your-face 3-pointer or a drive to the hole.