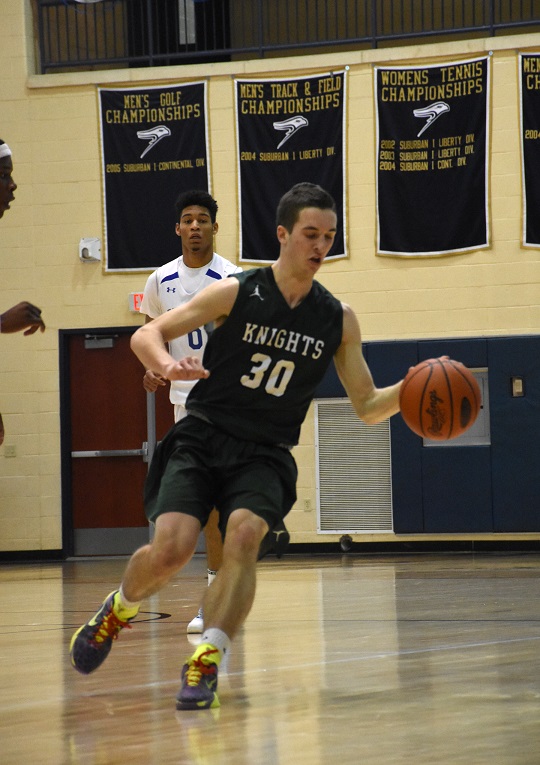 Delco Christian’s Wyatt Harkins has stepped up to help the Knights depleted squad. He’ll have to star again if DC hopes to get by Greenwood in the first round of the PIAA Class A Tournament. (Digital First Media/Anne Neborak)

Delco Christian’s return to the state tournament from the No. 6 seed in District One to its runner-up finish seems a long shot. Their opponent in Friday’s PIAA Class A opener, Greenwood, wound its way to the District 3 final as the No. 10 seed.

The reward for the Wildcats (13-13) is home-district advantage as Delco Christian ventures to Central Dauphin East Friday evening at 7:30.

Both teams, as second seeds from districts, come off losses. The Knights (14-12) marked the 28th win for Phil-Mont Christian in a 58-41 handling in the District One title game.

Greenwood saw its dream run ended by unbeaten York Country Day, 56-44, in the District 3 final. Along the way, Greenwood tipped Millersburg, the team that ended Delco Christian’s season in the second round of states last year. Greenwood’s scoring is top-heavy, led by Noah Wright (11.2 points per game), Seth Ferguson (10.0) and Kevin Sheaffer (7.5).

← In states return, Academy Park unfazed by Roman Catholic challenge
History could be on Chester’s side in PIAA tournament →