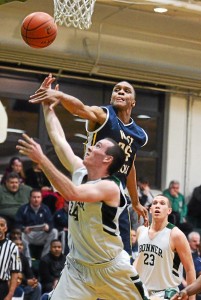 Henry Miller knew this year was going to be a test.

The Delco Christian senior knew coming into the season what his team had lost from last year’s PIAA Class A qualifying team. He knew that however much talent there was still in the pipeline this season, it was raw, largely lacking varsity experience.

Someone would have to step up and be the player everyone looked to. That someone, Miller determined early on, was exactly who he would become.

Miller is averaging 21.0 points per game this season, second best in the county, all while trying to set an example for the younger players in the Knights squad to follow.

“It’s pretty tough and different,’ Miller said. “Last year, I always had guys I could turn to. This year, we’re a young team. We’ve got lots of talent, but a lot of first-year varsity players. As far as stepping into a bigger role, I can be more of a leader and get my teammates involved more.”