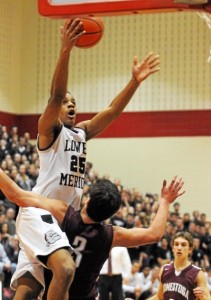 The Lower Merion High School boys’ basketball team has had a history of playing its best basketball in February. That trend has certainly continued this year as the Aces have won 15 of its last 16 games including its third straight Central League playoff championship.

In front of a packed house at Harriton High School that included spirited student sections from both Lower Merion and Conestoga, the top-seeded Aces fought back from an early deficit to defeat second-seeded Conestoga 64-55.

Webmaster’s note: If you missed the game you can listen to it in its entirety by clicking on the Game Archive link on the right side of the page.  Don’t be shy…………it’s free!  Enjoy!

(click on this link to go to the full article)