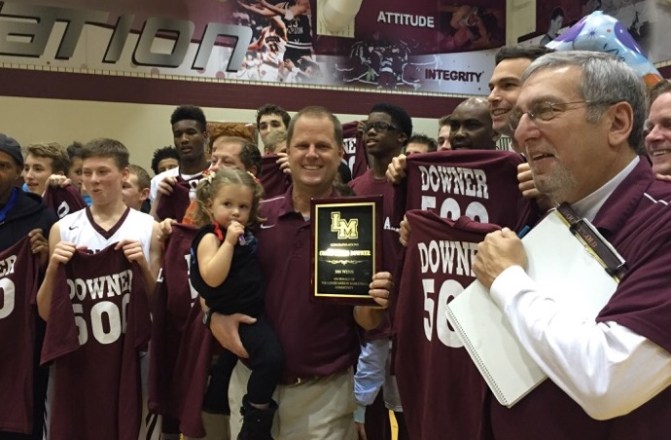 Photo courtesy of aceshoops.com Lower Merion coach Gregg Downer holds his 500 win plaque in one hand and his daughter Brynn in the other following the Aces win against Garnet Valley Tuesday.

Lower Merion High School boys’ basketball coach Gregg Downer has always put his players and other coaches ahead of himself. Heading into Tuesday night’s Central League match-up against visiting Garnet Valley, the attention was focused on Downer and for good reason.

When the clock ticked under 1:00 remaining, the Lower Merion student section known as the “Dawg Pound” held up signs with 500 printed on them and began chanting “Downer”.

As the chants got louder Downer acknowledged the appreciative student section before giving assistant coach Kevin Grugan a small hug as the final seconds ticked off in a 72-55 win giving Coach Downer his 500th career win at Lower Merion.