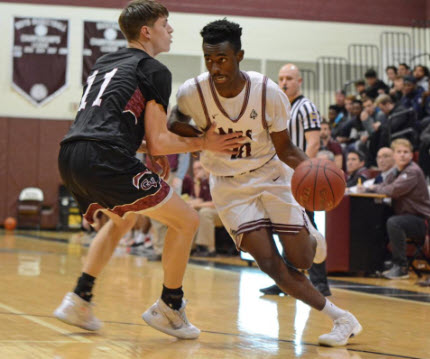 After graduating an 11-man 2019 class that had made up the majority of the varsity roster –– and production –– for the last four seasons, Lower Merion certainly has a new look. But the Aces are just as dangerous, as they proved on Tuesday night as they welcomed one of the other Central League front-runners to the Bryant Gymnasium, took a good shot from Garnet Valley and bounced back for a 69-58 win.

Keep an eye out on Wednesday for a feature story on the Aces and their massive project of adjusting and learning, but in the meanwhile, here’s a report about their win and some notes and stats on two teams which look primed to make a run at a league title in a couple months, as well as a photo gallery down below.

There’s no missing the Aces’ biggest new addition, literally. At 6-foot-9 and 250 pounds, sophomore forward Demetrius Lilley is the first big-time post player since Darryl Reynolds graduated in 2012, and he’s bigger than Reynolds. Garnet Valley did a decent job on the impressive young post player early on, but LIlley’s size was too much for the Jaguars; I had him with 19 points and 21 rebounds, the Aces’ staff had him for 23 boards. Either way, it was a massive night on the glass for Lilley, who was 8-of-18 from the floor and 3-of-4 from the foul line, with a number of his misses eventually finding the hoop on second or third-chance efforts.