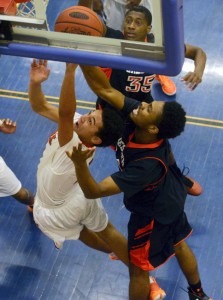 William Penn’s Brandon Smallwood goes up for a shot against Chester’s Juanir Moore in the second half of Saturday’s game. In a tightly-contested game, William Penn lost by a point to a powerful Chester program. (Chris Dunn — gametimepa.com)

On one side, the Clippers (4-1) celebrated. Their coach, Larry Yarbray Sr., smiled. The long two-hour bus ride back to Chester would be an easier one.

Down the nearby hallway, past the court where they met last season’s District 3 Class AAAA champions, heads sunk low. William Penn (5-2) had just taken one of Pennsylvania’s most storied basketball programs down to the final seconds.

An appearance in every PIAA tournament but one in the last 30 years.

Three starters at least 6-foot-6 and a few more off the bench.

None of that provided any comfort for the Bearcats or their coach.

(click on this link for more pics, video and the full story)