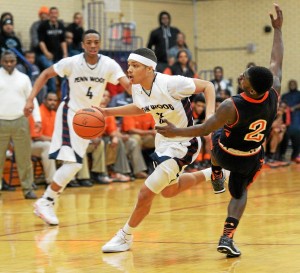 The applause started on the court, where players dogpiled on top of one another, and it followed the Patriots into their locker room. Penn Wood seemed like it had an endless supply of handshakes and high-fives.

“I’m proud of our guys,’ Penn Wood coach Clyde Jones said after his Patriots eked past Chester, 47-46, Thursday night to hand the Clippers their first loss in Del Val League play. “How can you not be after (a game like) this?’

Malik Jackson’s third-quarter 3-pointer punctuated a 14-5 run that helped Penn Wood erase its once eight-point deficit. In the fourth, Jackson’s two free throws with 35 seconds to go made the difference.

Not a great win?

Penn Wood’s post-game celebration sure made it feel like a big game.

“The crowd made it a big game,’ Jackson said.

No matter how they wish to categorize this one, the Patriots (12-5, 4-2) needed this victory. And considering that, only 16 days ago, the Clippers (11-5, 5-1) handed these Patriots a 20-point defeat, the euphoria and aftermath that Thursday’s win produced almost felt unreal.