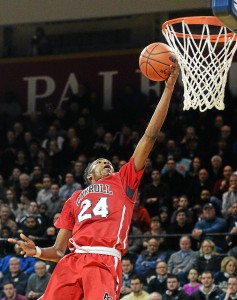 Derrick Jones turned to the crowd and flashed a wry smile after he jammed over an unsuspecting Erie Cathedral Prep player in the first half of Tuesday night’s PIAA Class AAA semifinal game at Bald Eagle Area High School.

The Archbishop Carroll senior was feeding off his opponent’s boisterous student section, which had egged him on during warmups.

It’s nothing Jones hasn’t heard before, but the Cathedral Prep faithful released the hounds on him. The fans pulled back no punches. Jones was cool with it. In ways, he welcomed the jeering.

“It gets me going,’ Jones said after a thoroughly dominating 59-32 victory that propelled the Patriots to their second state final in three years. “It makes me play harder, it makes me want to shut them up.’

The UNLV recruit scored a game-high 22 points, but he made his money defensively and on the glass. Jones was a monster, posting five blocked shots and 22 rebounds roughly half of which came on the offensive end in putback style.

And it’s because of his effort, and the fact that Cathedral Prep appeared extremely hesitant to test him, that Carroll is back in the PIAA Class AAA final for the third time in program history, chasing its second championship in boys basketball.