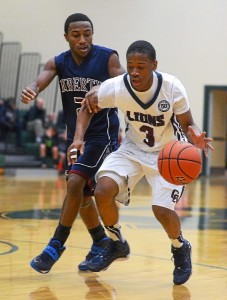 Mike Jolaoso didn’t have the scoring output he’s been used to this season, but he made sure to come through at the biggest time for Episcopal Academy.

With the Churchmen down by two after Del Val Charter converted a 3-point play with 3.6 seconds to go, EA coach Craig Conlin called timeout and drew up a play for Jolaoso. That faith was rewarded as Jolaoso drained a 3-pointer at the buzzer to give the Churchmen a 43-41 win at the Episcopal Academy tournament Friday.