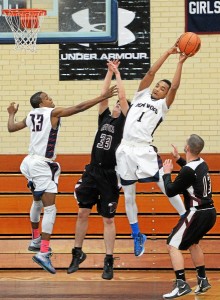 Clyde Jones never left his seat at the end of Penn Wood’s bench. He didn’t need to. Just because Jones was glued to his folding chair doesn’t mean his lips were sealed, though.

More than once, Jones leaned into senior shooting guard Malik Jackson for not following through on his open jumpers.

“He was just off tonight,’ Jones said of Jackson, the leading scorer in Penn Wood’s 84-42 doubling up of Chichester Thursday night.

Jones’ definition of “off’ might contradict with another coach’s interpretation of the word. Jackson finished with a game-best 31 points, to go with 10 rebounds, four assists, three steals and a block. But, as Jones pointed out, Jackson missed all but 10 of his 28 shot attempts.

“It’s following through and finishing his shots,’ Jones said, chuckling. “That kid should’ve had 45 (points). But I’ll say this — he might be the best shooter I’ve had at Penn Wood.’

Better than 1,000-point scorers Tyree Johnson, Duane Johnson and Aaron Brown, the latter of whom made the trip from Saint Joseph’s University to attend this game? Better even than 3-point specialists Chris White and Will Brown?

“Better,’ Jones said. “Malik is averaging 25 per game. He has the heart and desire to average 30.’

To say Jackson shot the lights out would be misleading. The overhead lights at the Shoebox, Penn Wood’s home gym, went out twice during the fourth quarter, but Jackson by then had already been relegated to cheering on the Patriots’ second-stringers.