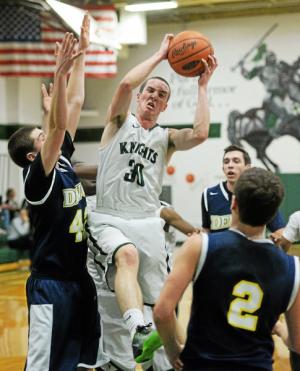 Delco Christian’s Wyatt Harkins, shown in a game against Devon Prep last year, will try to again pump up the sixth-seeded Knights, which will be missing two starters when it takes on Faith Christian Tuesday in the District One Class A semifinals. (Times File)

The do-everything Delco Christian guard was still stewing, in a channeled and productive way, over how his last game ended. It was the the first round of the Bicentennial League playoffs Feb. 9, and Harkins missed the front-end of a 1-and-1 in the final minute that could’ve sent the Knights to overtime against Bristol.

Instead, DC crashed out, 66-64, waiting more than a week to further its quest to return to the PIAA Class A tournament.

When that arrived, Harkins put the intervening week of practice-court atonement to good use, scoring 40 points — including a 20-for-20 day from the line — in an 83-49 thumping of No. 3 seed Calvary Baptist in the District One quarterfinals.