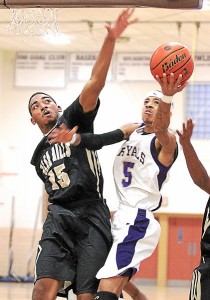 Torey Green and Beni Toure are proving to be quite a 1-2 scoring punch for Upper Darby.

Green, a 6-1 senior guard, and Toure, a 6-5 senior forward, combined for 41 points Thursday to help the Royals remain undefeated with a 66-59 nonleague triumph over Glen Mills.

The game originally was scheduled for a night contest, but was moved to an afternoon tipoff because of the winter storm.

The time change did not bother Green or Toure. Green, a transfer from West Catholic, scored 25 points and Toure added 16 to lead the Royals (9-0). The pair also teamed up to make five 3-point field goals. Isheem Adams and Demetrius Timmonds contributed eight and seven points, respectively, to help assistant coach Brian Kearns pick up his first victory. Kearns filled in for head coach Bob Miller, who missed the game to attend a funeral.

(click this link for the full article and more game scores)

← N-G rolls past Chester, 73-55
Big nights from Plousis, Swartz not enough for O’Hara →