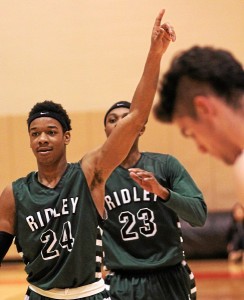 There are times when Brett Foster can be deferential, when he can be the distributor, when he can leave games in his teammates’ capable hands.

And there are times when Foster knows he needs to call his own number, exert his considerable control over games and will his Ridley team to wins. Monday night’s spectacle fell into the latter category.

Foster scored a game-high 23 points, including 16 in the second half and nine in the fourth quarter in leading the Green Raiders to a 70-64 win over Conestoga in the Central League championship game at Harriton High School.

It’s the first loss that the Pioneers, the top seed in the District One Class AAAA tournament that kicks off Friday, have suffered at the hands of league opposition this season. They bested Ridley, the No. 9 seed in District One and No. 3 entering this tournament, in their previous two meetings and went 16-0 through the regular season.

Monday was different, though, thanks to the string-pulling of Foster, who did most of the vital work in cementing the Green Raiders’ first Central League title since 2008.

He set the tone in the second quarter, as Ridley cultivated a one-point lead on the back of five 3-pointers, two from Foster. His daring drives to the rack — always under control, but out of Conestoga’s control — fostered a lead that grew as large as 12 in the second half.

← Carroll holds at No. 2 in Class AAA
Healthy at last, Ridley ready for Rustin, districts run →