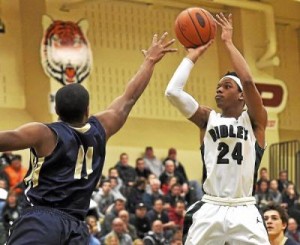 His team’s double-digit fourth quarter lead had been winnowed to four, and a spirited and a relentless West Chester Rustin squad was threatening to cut the deficit even further with a little over three minutes remaining in the game.

But just when Friday’s District One Class AAAA opening-round skirmish appeared to be slipping from Ridley’s grasp — and the rowdy, electric green-clad Sixth Man student section had quieted to a church whisper — Brett Foster stepped up once again to ensure the Green Raiders’ improbable postseason run would continue.

Foster, the hero of Monday night’s 70-64 upset of Conestoga for the Central League title, stepped to the line and buried a pair of free throws to extend the advantage back to six and ignited a 14-2 spree down the stretch that enabled Ridley to finish off Rustin, 68-55.

The ninth-seeded Green Raiders (20-5) will get another home game Tuesday, thanks to No. 25 Great Valley’s 56-49 upset of eighth-seeded Central Bucks West.

“We knew the game was never in control until the end,’ Foster said. “I have to be aggressive for my team and I have to maintain my composure when we need to control the ball or make foul shots at the end.’