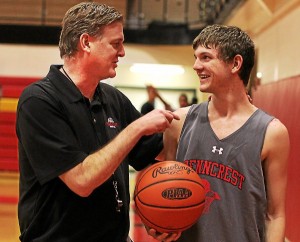 It was the summer of 2004 when Mike Doyle got the kind of offer many coaches dream of.

Fresh off an unbeaten regular season and a run to the Elite Eight, Saint Joseph’s coach Phil Martelli offered Doyle, wrapping up his first season at the helm of Penncrest, a job on his staff. The position represented a chance for Doyle to return to Hawk Hill, the basketball family he’d married into, where he’d spent nine seasons on three coaches’ staffs.

For most coaches, it would’ve been an easy decision, to work again for the reigning Associated Press national Coach of the Year. After careful deliberation of the benefits and drawbacks, though, one item in particular led him to decline.

“I made a positive and negative list,’ Doyle said this week after a Penncrest practice, “and I think one of the big things on that positive list was the ability to coach my son.’

Mike Doyle Jr. was just 7-years old at the time. But a decade later, the dream of father and son becoming player and coach at the high school level has come to fruition.

A similar story is unfolding this season at Springfield, where Kevin McCormick, in his 20th season as the head man, has his son, Kevin, under his tutelage.