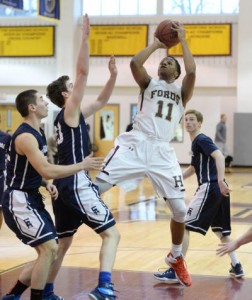 Conner Delaney didn’t have the biggest of games Tuesday. But he was there when Episcopal Academy — and their Inter-Ac title hopes — needed him most.

It was one of only two baskets for Delaney on the day, giving him five points and putting the Churchmen a game ahead of the Fords atop the league.

Nick Alikakos scored 13 points to go with 15 rebounds and five blocks, including six points in a third quarter that EA started with an 8-0 run to get back into contention.

Shawn Alston scored 13 points, and Lamar Stevens added 11 for the Fords, but Stevens’ last-second drive to the hoop just rimmed out. Cameron Reddish and Derek Mountain contributed nine points apiece for the Fords (12-9, 4-2), who have lost two consecutive league games.

If you missed last nights thrilling Glen Mills vs Chester game you can listen the full game on our archives.  Just click on the Game Archive logo on the right.)