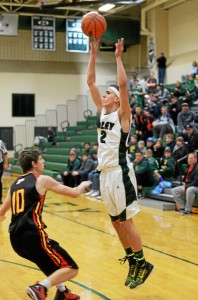 Drew Hanna was braced Saturday for what he called “a typical dogfight against Ridley.’ In the end, the host Green Raiders proved to be the side better equipped to pull out a hard-fought win.

Behind 19 points each from Nick Czechowicz and Brett Foster, the Green Raiders captured a 64-48 victory that could prove vital in the Central League standings.

How the teams arrived at that final was befitting the dog-eat-dog nature of the Central League this season. The teams battled through three technical fouls, a slew of hard fouls near the basket and an increasingly heated atmosphere in a game that was questionably officiated at best.

As much as the emotions see-sawed, the players also dealt with the ebb and flow of runs back and forth in a hectic game.

“You’ve definitely got to keep your composure,’ Czechowicz said. “When you get an energy play like a fast-break layup or a block or something, it keeps building up, the momentum. Then you get a stop on defense and each player just plays off each other.’