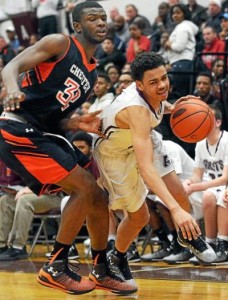 Abington’s Robbie Heath, right, gets fouled by Chester’s Maurice Henry as he turns toward the basket Wednesday. Henry’s Clippers dropped a 55-47 decision in overtime. (Bob Raines)

The door closed to the classroom that, on this night, served as Chester High’s locker room. Larry Yarbray spoke, and his players listened.

Not much of Yarbray’s message was audible, except for these two inextricable elements: If Chester takes the final shot, Wednesday’s game doesn’t go to overtime. And if overtime isn’t required, the Clippers win.

It didn’t work out that way, of course.

Chester squandered its final possession of regulation, forced a miss by Abington as time expired, and then watched as the host Ghosts burst past them in overtime, 55-47, to claim the District One Class AAAA second-round game.

The 11th-seeded Clippers (14-10) sustained their first district-playoff defeat since 2010, ending a 21-game districts winning streak. They’ll need to topple No. 14 Coatesville in Friday night’s playback stage if they hope to protect another streak — their 22 consecutive years advancing to the PIAA Tournament.

It’s not often a team’s fan base storms the court following a second-round playoff game. At Abington, that was the scene. The Ghosts locked up their fourth straight trip to the state playoffs by beating vaunted Chester, which hadn’t lost in districts since falling to Souderton in a quarterfinal Feb. 27, 2010.