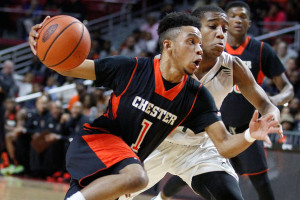 Plymouth Whitemarsh is aiming for its first PIAA District 1 Class 4A boys’ basketball championship in nearly two decades against Chester.

To accomplish that, the Colonials will have to find a way to handle the Clippers’ ferocious defensive pressure, considerable size, and wave of confidence gained from winning 18 of their last 19 contests.

“We have to appreciate that Chester is going to bring a level of energy and attitude to the game that we have to match,” PW coach Jim Donofrio said.

PW, making its second straight appearance in the final, last won a district crown in 1998. Chester is aiming for its fifth title in six years, 12th in 15 seasons, and 24th overall.

“It should be a great game,” Clippers boss Larry Yarbray said. “We’re going to go out and play our style of game, which is similar to theirs, and let the chips fall where they may.”