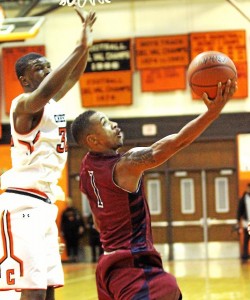 It was then, as he and his Chester teammates diagnosed the shortcomings of their 33-point humbling at the hands of Neumann-Goretti Dec. 30, that the soft-spoken sophomore guard spoke up, preaching a little reassurance to his team that despite two straight setbacks, things would be OK. The declaration from such an unlikely source caught coach Larry Yarbray a little off guard.

Carter made sure he backed up the talk Tuesday evening.

Carter scored a season-high 14 points, helping lead an injury-riddled Chester lineup to a 65-45 win over Penn Wood on the evening the Clippers dedicated their gym to the late great coach, Fred Pickett.

Carter’s performance was the kind of steadying outing that would’ve made Pickett, a coach renowned for his calm and even demeanor, proud. Missing a pair of starters in guard Khaleeq Campbell and forward Jamar Sudan, Yarbray had to dig deep into his bench for answers. And some of the most convincing minutes were provided by Carter, who went 6-for-8 from the field, including making his first four looks.

Webmasters note: You can listen to first half of the game as well as our interview with Matt DeGeorge by clicking on the Game Archive button on the right of this page.